Park Plaza Victoria Amsterdam. A heritage and its history.

Opened on August 19th 1890, Victoria Hotel, Amsterdam is certainly worthy of that definition. But don’t take our word for it, a long and eventful history speaks for itself…

The prestige we enjoy today is thanks to the historians, novelists, filmmakers and fashionistas who have immortalised our hotel in popular culture. It’s thanks to the long list of illustrious guests who have graced our halls – from Louis Armstrong to Mata Hari, we’ve seen our share.

With the recognition of these extraordinary individuals came our listing as a National Heritage Site. The rest, as they say, is history… With the opening of Amsterdam Centraal station set for 1889, Victoria Hotel was first conceived by German architect J.F. Henkenhaf in 1883. His vision was to create a property – just moments from the station – that would not only complement the structural splendour of the opposing railway hub, but also entice the constant stream of travellers through its doors.

More than 130 years later, it’s safe to say Henkenhaf’s vision was a soaring success but not without a few hiccups along the way. For starters, to create a worthy companion piece to Amsterdam Centraal (designed by legendary Dutch architect Pierre Cuypers) was no mean feat. To this day, the building is revered as an architectural masterpiece thanks to its palatial facade and stone reliefs glorifying Amsterdam’s industrial and commercial prowess.

Undeterred, Henkenhaf and his team set about an intensive construction project which saw them buy up or tear down all the surrounding properties on the Damrak and Prins Hendrikkade.

All but two that is… As can be seen clearly today in the hotel’s facade, two of the original houses dating back to 1602 are still standing proud. This architectural anomaly is the result of two determined residents who, despite being offered increasing sums to sell their properties, refused to budge in the hope of getting a higher price. One of these residents was a tailor (the other ran a liquor store) by the name of Carstens, a man whose name inspired our authentic Dutch dining destination Carstens Brasserie – but more about that later. With a strict deadline in front of him and an eye for innovation, Henkenhaf decided to press on and build around the unremitting duo. This is why you see the idiosyncratic exterior to this day. With all the right ingredients for a captivating story, the tale of the immovable residents at 45 – 47 Prins Hendrikkade found a home in the 1999 novel ‘Publieke Werken’ by Thomas Rosenboom. Ingeniously written and tightly composed, the novel earned the author the esteemed Libris Prize the following year. The author wielded a little poetic licence and transformed the liquor seller into a violin maker but the story stayed true to history. After the runaway success of the novel a motion picture duly followed in 2015 directed by Joram Lürsen.. Equally successful and today available on Netflix under the English title ‘A Noble Intention’, the film was selected as the Dutch submission for the Best Foreign Language Film at the 89th Academy Awards and won the Pearl Award at the Film by the Sea festival in the Netherlands. Victoria Hotel also enjoys international fame thanks to the many fashion shows that it has hosted over the years. Following the end of World War II, droves of visitors would descend on the hotel every spring and autumn to marvel at the latest collections from major Italian, English and Parisian fashion houses.

All three of the dominant influences in post-war haute couture – Jacques Fath, Christian Dior and Pierre Balmain – presented shows at the hotel, alongside other giants of the fashion world such as Jean Dessès, Carven, Elsa Schiaparelli, Nina Ricci, Rochas and Pierre Cardin. Not to mention a certain Rita Hayworth who, as one of his most loyal customers, accompanied Jacques Fath through our doors. Hosted in what was then Stuyvesant Restaurant, fashion show attendees would dine on the likes of Suprême de Sole and Poularde au Cherry in tribute to the French collections on show. Embracing the past. Excited by the future

With one foot in the past, Victoria Hotel also fully embraces the present and is excited by the future. Continuing our long and fruitful relationship with the fashion industry, we work closely with Amsterdam Fashion Week to host shows, talks and events that showcase the city’s top design talent and emerging designers. The supremely gifted Lizzy van der Light, to name but one, launched her Le Cafe Studio Noir label from our hotel.

In 2019 we were delighted to welcome one of the most highly principled fashion events in the Netherlands, Lichting, at our hotel. Acting as a bridge between students and the talent-hungry fashion industry, Lichting brings together the best academy graduates of the previous year in a central catwalk show. In the audience, 700 of the most important people for the next step in their careers are ready to spot the next big thing.

We like to think the masters of post-war couture would approve. Inspired by the aforementioned immovable resident, Carstens Brasserie is not only a tribute to the rich history of the hotel but also your starting point for a culinary journey through the Netherlands. Unlike the fashion lovers of old who were treated to French delicacies at Stuyvesant Restaurant, today’s visitors to Victoria Hotel can enjoy the Netherlands’ finest products that have been revitalized with a modern twist. Guests at Carstens can expect surprising flavours from the Veluwe region, the catch of the day from the North Sea and much more on a seasonal menu that has been recognized by the prestigious restaurant guide Gault Millau.

Since Centraal Station opened, we have been finding new ways to wow our guests. We were the first Amsterdam hotel to offer hydraulic elevators, electric lighting and double-glazing but today Victoria Hotel is very much a contemporary institution. The same welcoming nature and skill for anticipating guests’ needs remains at the core of everything we do. Innovation remains one of our highest priorities, but we are careful to respect the rich history of tradition that is intrinsic to our identity. You’ll see this approach brought to life via the vintage touches which are sprinkled throughout our modern space. Our concierges are legends in their own lifetimes, many of them members of the elite association called Les Clefs d’Or, meaning ‘the keys of gold’. Anything you need to know, about the history of the hotel or modern day Amsterdam just ask and put that guidebook back in the bag.

The Victoria Hotel couldn’t be anywhere else. It’s part of Amsterdam itself; a much loved landmark whose story of innovation, glamour and service is woven into the city’s history. It’s been writing the chapters of its guests’ lives for 130 years by being one step ahead of their needs. Today, that forward-thinking tradition is shaping our future, as the area around the hotel prepares for a new era. 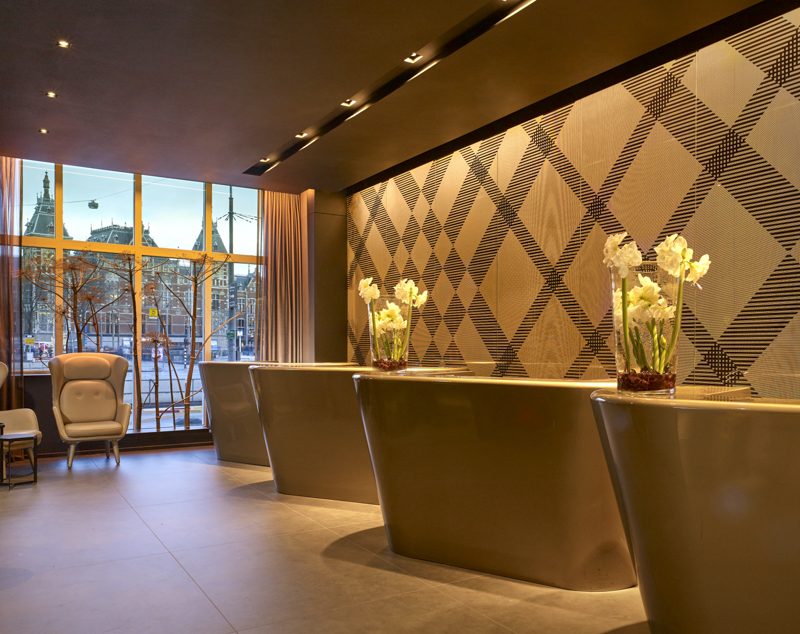 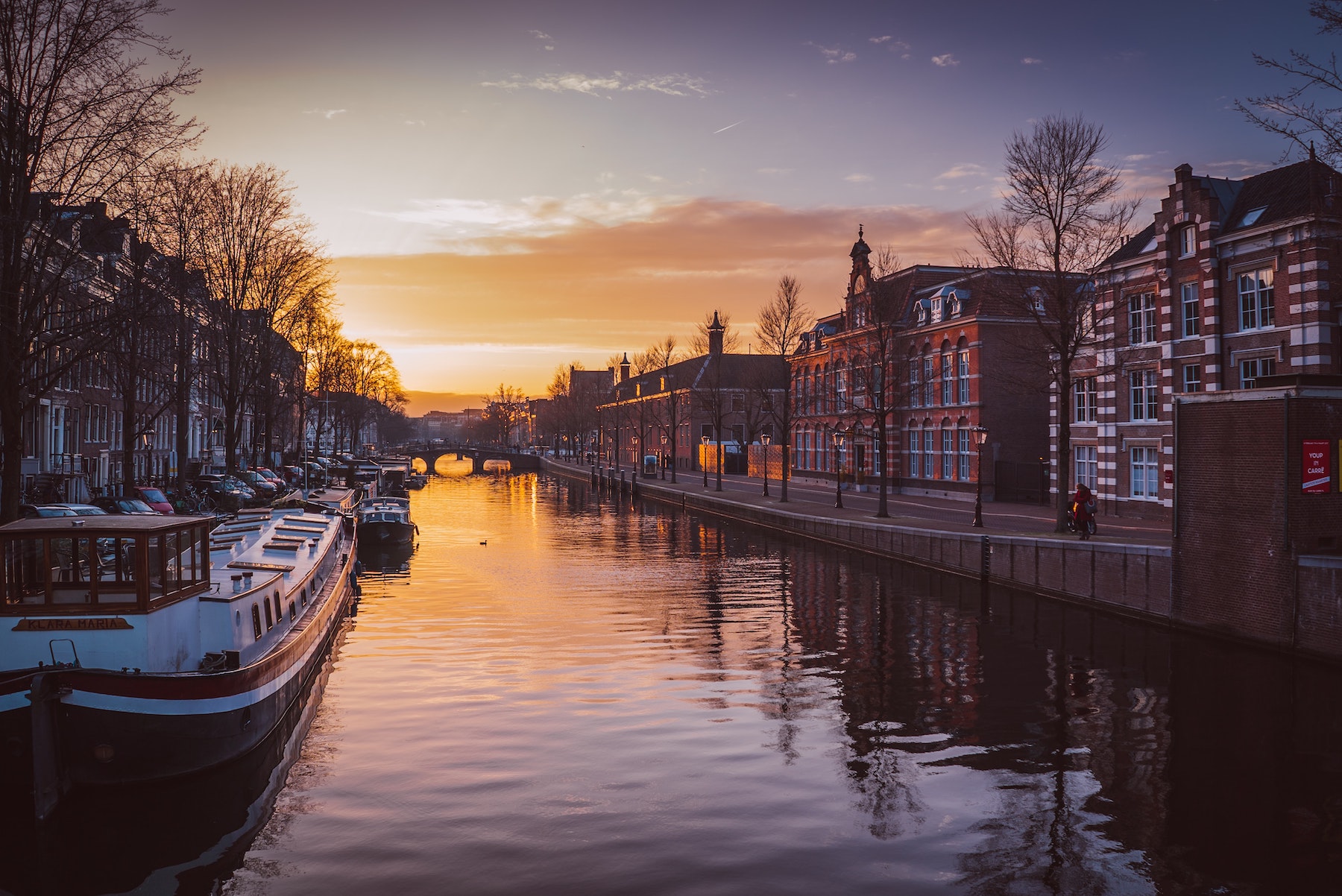 Amsterdammers think of our hotel as much a part of their city as the canals, barges and bicycles.

We intend to keep it that way.